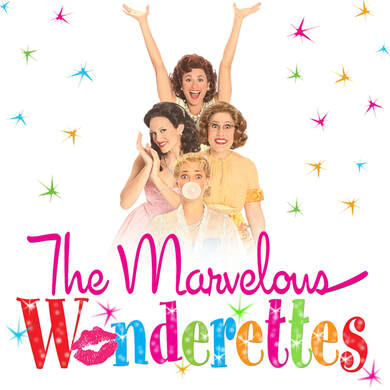 This smash off-Broadway hit takes you to the 1958 Springfield High School prom where we meet the Wonderettes, four girls with hopes and dreams as big as their crinoline skirts! As we learn about their lives and loves, we are treated to the girls performing such classic ’50s and ’60s songs as “Lollipop,” “Dream Lover,” “Stupid Cupid,” “Lipstick on Your Collar,” “Hold Me, Thrill Me, Kiss Me,” “It’s My Party,” and over 20 other classic hits! You’ve never had this much fun at a prom and you will never forget The Marvelous Wonderettes—a must-take musical trip down memory lane!
“One irresistible musical! An utter charm bomb!” –The New York Times
“The fun never stops!” –Associated Press
“An expertly wrought showcase of pop music—it’s tremendously fun.” –Variety
“A laugh-a-minute song fest. Move over, Forever Plaid!” –Back Stage
“It doesn’t get better than this!” –WOR Radio
“Deliciously enjoyable—wildly entertaining froth!” –Los Angeles Times 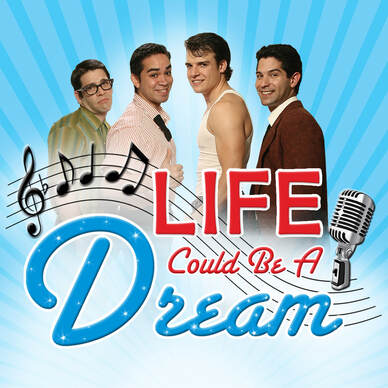 SH-BOOM! LIFE COULD BE A DREAM
A Spectacular Salute to the Greatest Doo-Wop Hits of All Time!
Written & Created by Roger Bean

SH-BOOM! Take another trip to Springfield and meet Denny and the Dreamers, a fledgling doo-wop singing group preparing to enter the Big Whopper Radio contest to realize their dreams of making it to the big time! Trouble comes in the form of Lois, who arrives to put some polish on the boys. Denny falls in love, Wally falls in line, Eugene falls apart, and along comes handsome heartthrob Skip to send the whole situation spinning. The '60s hits say it all: “Fools Fall in Love,” “Tears on My Pillow,” “Runaround Sue,” “Earth Angel,” “Stay,” “Unchained Melody,” “Lonely Teardrops,” and “The Glory of Love.” Winner of the Los Angeles Drama Critics Circle Award for Best Musical, Life Could Be a Dream will leave you laughing, singing, and cheering—let’s hear it for the boys!
"Critic's Pick! Dream is so frothy, it floats."--Los Angeles Times
“The title neatly sums up the euphoric charge generated by this feel-good musical.” –Backstage 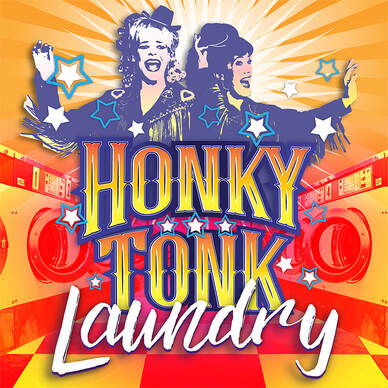 Move over, Thelma and Louise! When Lana Mae Hopkins, owner and proprietress of the Wishy Washy Washateria, hires Katie Lane to help out in the laundromat, they soon find themselves up to their elbows in soap, suds, and cheatin’ hearts. Watch these two country angels join forces to turn their good ol’ laundromat into a boot-scootin’ honky-tonk, exacting a touch of revenge against those that done ‘em wrong, and all while guaranteeing each and every customer a good, clean time! Take a ride to Nashville heaven in this new musical from Roger Bean (The Marvelous Wonderettes, Life Could Be A Dream). Featuring the music of Reba McIntire, Carrie Underwood, Pam Tillis, the Dixie Chicks, Martina McBride, Tammy Wynette, Patsy Cline, and Loretta Lynn.
“Terrific!” –Los Angeles Times • “Wonderful!” –Stage and Cinema
“Effervescent!” –StageSceneLA • “Delightful!” –Theatre Spoken Here
“Heartwarming!” –The LA Beat • “Bravo!” –BroadwayWorld 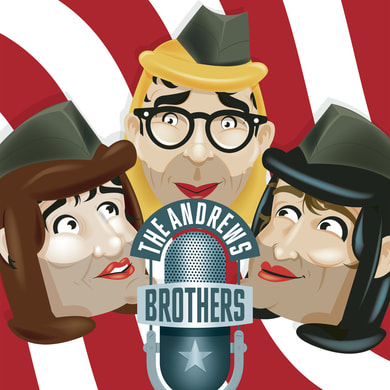 A USO show is threatened with cancellation when a certain famous trio of singing sisters fails to appear, and it’s up to three earnest and determined stagehands to go on with the show! The Andrews Brothers is filled to the brim with over 25 songs made famous by the Andrews Sisters, including the showstoppers “Boogie Woogie Bugle Boy,” “Don’t Sit Under the Apple Tree,” and “Ac-Cent-Tchu-Ate the Positive.” Mistaken identities and madcap adventures—imagine Bing Crosby and Bob Hope in a road movie of Some Like It Hot--along with the music of an entire generation highlight this wonderful valentine to the heroes of World War II.

THE MARVELOUS WONDERETTES: DREAM ON
The Sequel to the Smash Off-Broadway Hit Musical
Written & Created by Roger Bean

It’s 1969 and The Marvelous Wonderettes are back at Springfield High (Go Chipmunks!) to throw a retirement party for their favorite homeroom teacher. As the girls sing their way through the greatest girl-group hits of the 60s and bid Miss McPherson a fond farewell, one of the Wonderettes reveals she’ll also be saying goodbye to search for success and happiness on her own. Act two finds the girls back together as the class of 1958 celebrates their 20-year reunion. The classic pop and rock hits of the seventies provide the perfect soundtrack for these old friends to catch up on the places life has led them, all performed with their own marvelous spin! Featuring "Gimme Some Lovin," "I've Got The Music In Me," "I Will Survive," "Don't Leave Me This Way," "The Hustle," "Come In From the Rain," "We Are Family," "Superstar," "I Am Woman," and many more!
“Marvelous and wonderful! These girls know how to throw a party” –Houston Chronicle
“Simply bullet-proof – charming, silly and wonderful!” –BroadwayWorld

We’re back in 1958, and it’s time for the Wonderettes to graduate in this delightful sequel to the smash off-Broadway hit! Join Betty Jean, Cindy Lou, Missy, and Suzy as they sing about their final year in high school, celebrate with their fellow classmates and teachers, and prepare for their next step toward a bright future. Act Two zooms ahead to 1968, where the girls perform as bride and bridesmaids to celebrate Missy’s marriage to Mr. Lee! Featuring “Rock Around the Clock,” “At the Hop,” “Dancing in the Street,” “River Deep, Mountain High,” and 25 more hits, Wonderettes: Caps & Gowns will have your audience cheering for more!
“Delightful and nostalgic – a guaranteed good time!” –BroadwayWorld
“What transforms Bean’s work from a mere revue into something a bit more substantial is the deft way he develops character and uses songs to describe their problem of situation.” –The Orange County Register

The Wonderettes are back! This seasonal celebration finds the girls entertaining at the annual Harper’s Hardware Holiday Party. When Santa turns up missing, the girls use their talent and creative ingenuity to save the holiday party! Featuring great 60s versions of holiday classics such as “Santa Claus Is Comin’ to Town,” “Jingle Bell Rock,” “Run, Rudolph, Run,” and “Winter Wonderland,” the result is, of course, marvelous! This energetic and glittering holiday package is guaranteed to delight audiences of all ages. 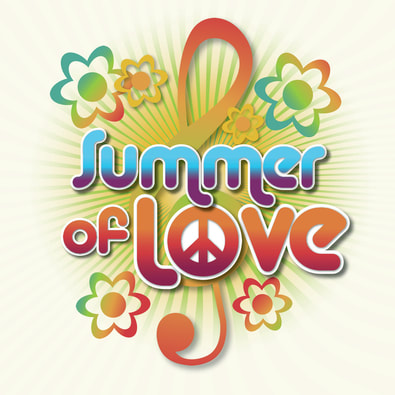 Another smash hit musical from the creator of The Marvelous Wonderettes! When a conservative runaway bride discovers the countercultural revolution of the Haight-Ashbury neighborhood of San Francisco, the hippies and dropouts of Golden Gate Park teach her to “Make Your Own Kind of Music!” This hippie, trippy musical features the powerful music of the late 1960s by some of the most influential artists of the love generation: The Mamas and the Papas, Donovan, Janis Joplin, Jefferson Airplane, and many more. With such hits as “Crystal Blue Persuasion,” “War,” “One Tin Soldier,” “Spinning Wheel,” and, of course, “San Francisco,” you’ll love this flower power, feel-good musical experience!
“Critic’s Pick! A fun-filled journey with a to-die-for score!” –Backstage
“Pure perfection! Foot stomping standing-ovations!” –Portland Daily Sun
“A sweet and creamy treat!”–Stage and Cinema 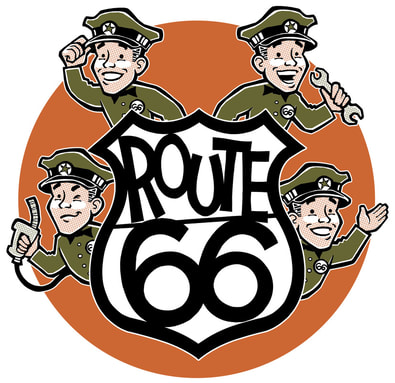 Take a dollop of Grease, mix in some Pump Boys and Dinettes and add a generous dose of Forever Plaid and you've got the high-octane fun of Route 66! Beginning with the sounds of 1950s Chicago and traveling along the “Main Street of America” to the California coast with the surf music of the 1960s, this exciting musical revue features 34 of the greatest “Rock ‘n’ Road” hits of the 20th century! Songs include “Dead Man's Curve,” “King of the Road,” “Little Old Lady from Pasadena,” “Beep Beep,” “Six Days on the Road,” “Little GTO,” “Fun, Fun, Fun,” and many more. Get your kicks with this smash coast-to-coast hit musical revue!
“A toe-tapping, hand-clapping, laugh-out-loud treat!” –The Wichita Eagle
“Bright, sassy and bursting with nonstop energy!” –San Antonio Express News
“Fast-paced, energetic and fun!” –Aisle Say, San Francisco
​“Route 66 is like Forever Plaid on high-octane fuel!” –Milwaukee Metro 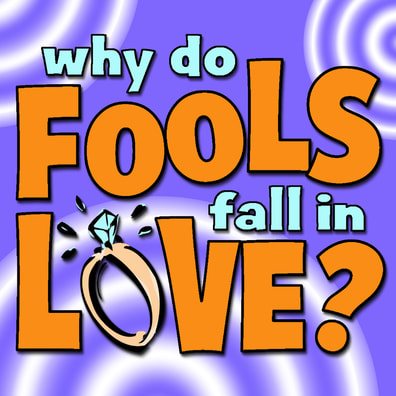 WHY DO FOOLS FALL IN LOVE?
The Rockin' '60s Bachelorette Musical
Written & Created by Roger Bean

Millie’s getting married! At her impromptu bachelorette party, Millie and her best friends dive into age-old questions about love, marriage, and the overwhelming dating game. As the celebration picks up steam and the drinks flow, the girls reveal scintillating secrets about their love lives as they poke fun and challenge each other to take control of their lives. Featuring smash pop-hits from the 1960s such as “My Boy Lollipop,” “I Will Follow Him,” “You Don’t Have to Say You Love Me,” “Hey There Lonely Boy,” this uplifting show reaffirms that during life’s struggles, true friendship will unveil its everlasting strength—and often with a real rockin’ beat!
“Funny, infectious and winning!” –Milwaukee Journal-Sentinel
“Enchanting and delightful!” –Ravalli Republic
“A tasty little musical confection.” --Bellows Falls Town Crier, VT
“If Sex and the City were a 1960s musical, this would be it!” --Summit Daily News
“Roger writes ensemble shows,” says Bets Malone, an original Wonderette. “Everyone’s passing a basketball all night. ​If it's all going well, the actors are functioning as musical instruments.”
–Los Angeles Times